Not much happened this last week, being only the second week of school and all, but I do have some art to share. It's always a slow start at the beginning of each semester, and it helps that the first week was only 2 days and the second week only 3 days long. It's a nice way to ease back into school instead of taking a plunge into the frenzy that is undergrad. This week will be the first full week of classes, so I feel like things are about to get serious.

One thing that just got serious is printmaking. I just started my first print! It had been a slow start since I haven't actually met with my professor yet. But since technically I can do whatever I want, I went ahead and started to carve. Walking into the printmaking room after all this time was magical, like walking into grandma's house after years of not being there. The smell of wood, ink, and whatever crazy chemicals that are used for lithography hit me and I couldn't help but smile and feel right at home.

This is the hourglass I mentioned in last week's post. A black hole eating up stars, planets, the universe itself. 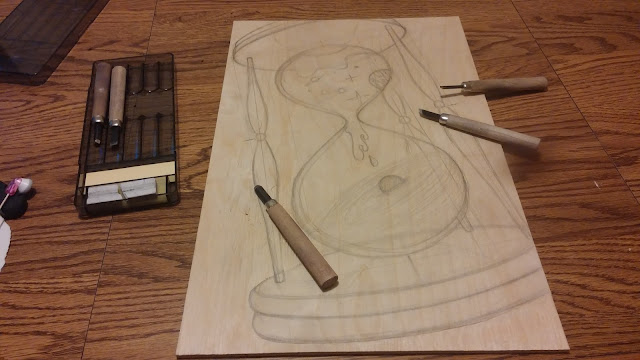 I'm also taking a painting class this semester. I still have not decided how I feel about painting. I love paintings, looking at them, thinking about them and their creators; yet I'm not sure how I feel about my painting. It is a lot of work, it is difficult, time consuming, and I'm not very good at it. On the other hand, there is something hypnotizing and soothing about painting, and I feel so accomplished when I do finish a painting. Maybe this class will help me figure out how I really feel. Here are some doodles from last week.

They look creepy because they don't have eyes. We were supposed to get the general feel of the head instead of focusing on details like eyeballs or nostrils. I apologize in advance for the nightmares. 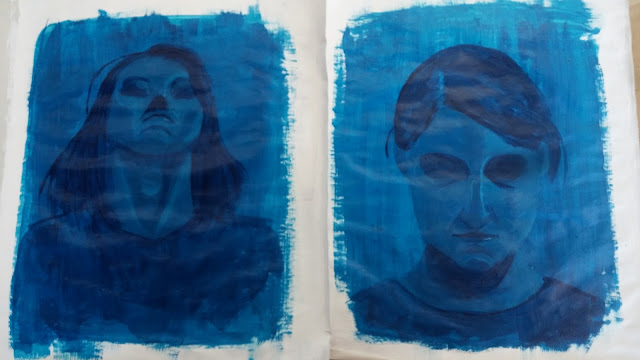 Lastly I'd like to share a little illustration I did.
I came up with the pun while driving yesterday, and I had to draw it. 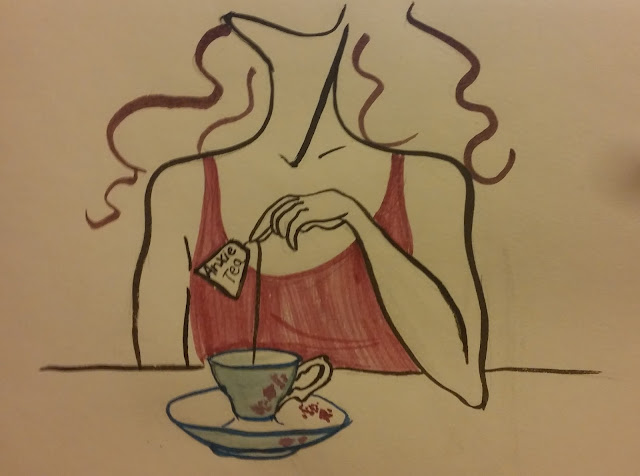 Posted by Di Vasquez at 9:00 AM No comments:

Happy start of a year!

I thought I would do at least one post while I was on break, but time just slipped by me. It was a short break, but it was good, and I did get a bit of art done; though not nearly as much as I would have liked. Art just takes a long time, like watching-several-seasons-of-a-show-while-working long.

The main project I took on this winter break, while I wasn't hanging out with my mom in her sewing room, or making an impromptu road trip to Texas, was a series of three self-portraits. One of myself as "I woke up like this," another as if I'd no skin, and the last showing just my bones. I have the first nearly done, though I have been putting off the hair since I think that's the least interesting part. 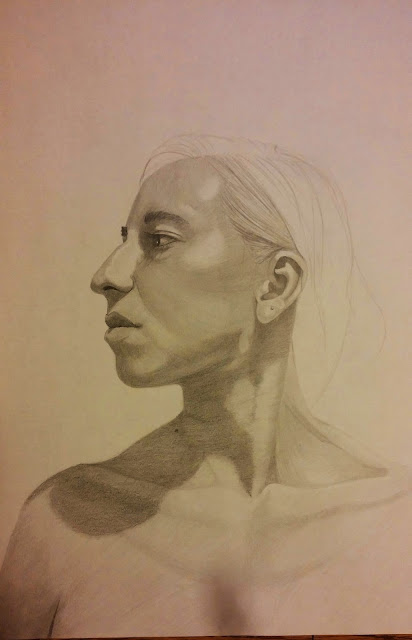 This is the second one, I thought it was done earlier today, but I might revisit a couple of parts on it. 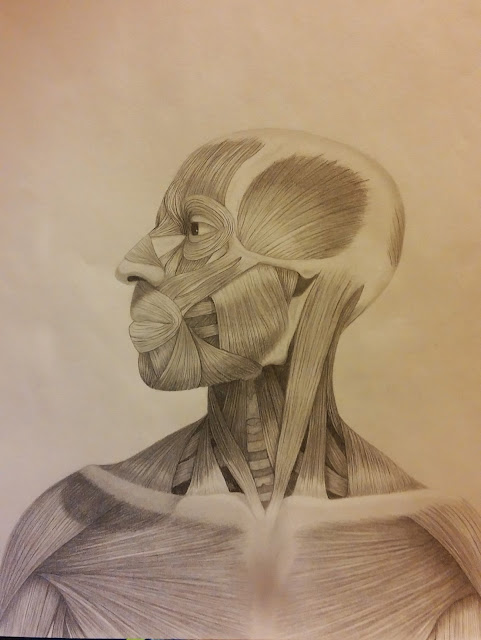 As for the third, I'm not sure when I will be able to get that done. It seems as though I will have another very busy schedule this semester.

This is another project I did over break. It was a gift to my grandparents in Idaho, who I have not seen in years. They visited various parts of Arizona in their younger days, and really enjoyed it. So, I figured I would offer them a little piece of the desert. 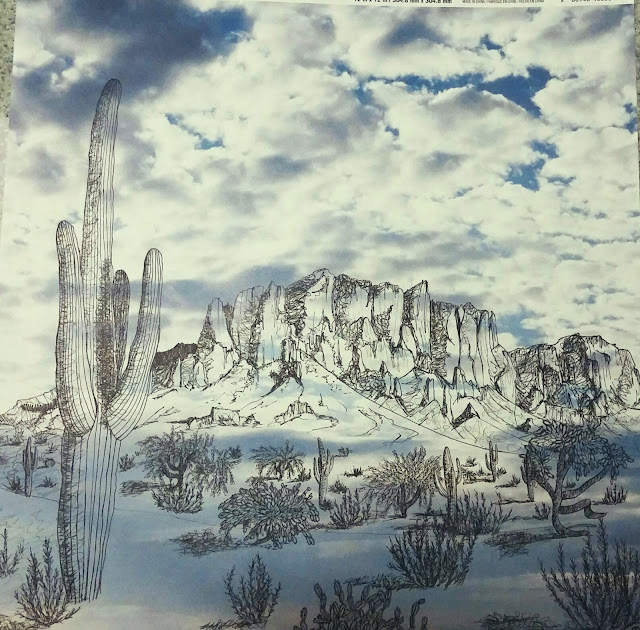 I found this amazing paper at an art store and had to it. There were other like it too, just square sheets of paper with photographs, geometric patterns, bits of larger paintings. I wasn't quite sure what I would do with them, but I did this piece and hope to make more like it. I'm not sure it'll be more desert landscapes, usually I don't do landscapes in general; however, I am open to exploring that genre.

Lastly, I offer some pictures of my sketchbook.

These are some ideas for my first project for my current illustration class, it's about the weather phenomenon known as El Niño. More details on that later. 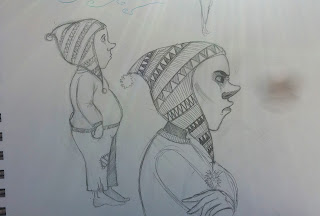 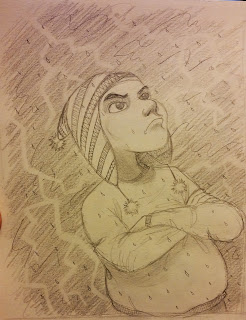 This is an idea I had for a relief print (Did I mention I'm taking an independent study for this? That means I can do whatever my little heart desires, it's very exciting!)

The concept is about how black holes eat up stars, even whole solar systems, if given enough time--that is if they don't emit too much Hawking Radiation and annihilate themselves. I have been doing some reading up on black holes, 'tis the time for some very interesting astronomy news! I used to be a huge astronomy nerd (yes, I know why Pluto is not a planet and should remain that way), so I hope I can realize this as a print. 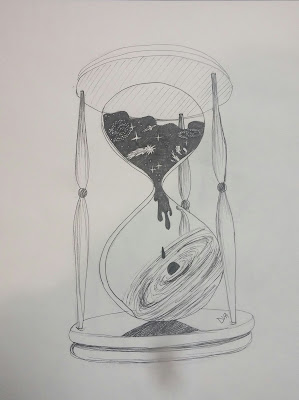 And lastly, I present some angel wings, made out of spaghetti and meatballs. This was a friend request; more on this later as well! I just wanted to get caught up on some of my latest artistic endeavors. 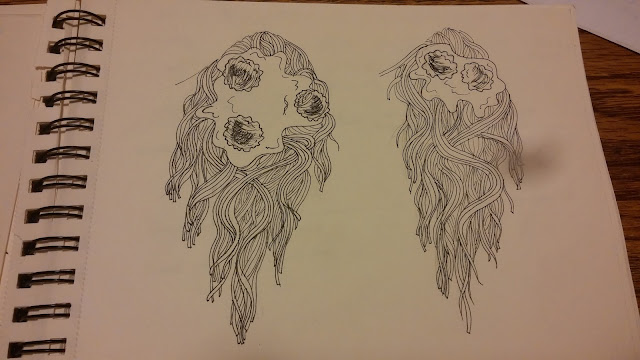